Thank you to everyone who helped make our first revival event possible!

Here's how you can find the partners who put this all together: 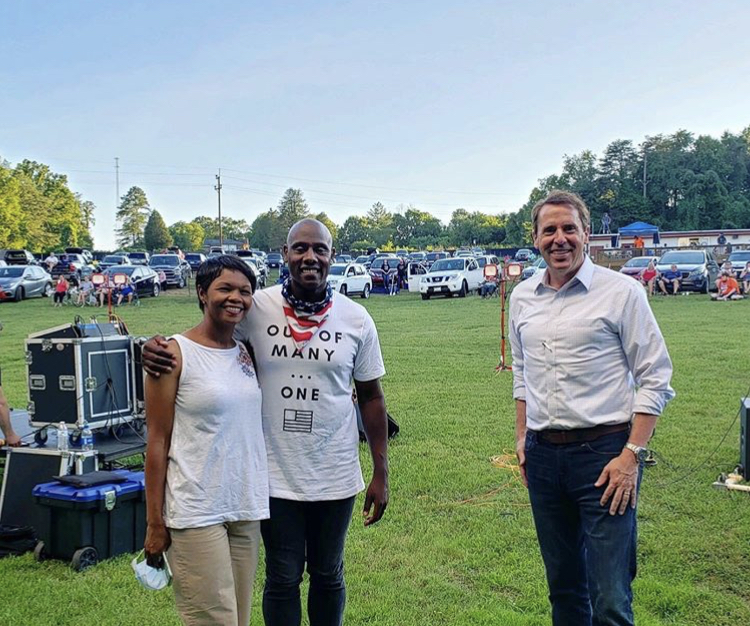 We want to take the time to express our deepest thanks and gratitude to our partners who helped make the FaithFire Freedom Tailgate a success.

We set out to glorify God and allow Him to touch the hearts of His people.

Here's the message from tonight, in case you'd like to read it for yourself:

I truly believe there is something prophetic about our being in Eden.

I asked the Lord why He wanted the ministry to start here.

And I believe I heard Him say, "It all started in Eden didn't it?"

There's a lot that happened in Eden.

And a lot we lost.

“So God created mankind in his own image, in the image of God he created them; male and female he created them. God blessed them and said to them, “Be fruitful and increase in number; fill the earth and subdue it. Rule over the fish in the sea and the birds in the sky and over every living creature that moves on the ground.” Then God said, “I give you every seed-bearing plant on the face of the whole earth and every tree that has fruit with seed in it. They will be yours for food. And to all the beasts of the earth and all the birds in the sky and all the creatures that move along the ground—everything that has the breath of life in it—I give every green plant for food.” And it was so. God saw all that he had made, and it was very good. And there was evening, and there was morning—the sixth day.”

My, how far we’ve fallen.

The cost of sin is everywhere around us.

We don’t enjoy the peace and communion with God and each other as it was designed.

What happened in ancient Eden set off a cataclysm of consequences. We inherited the sin of our ancestors. The first of mankind.

“When the woman saw that the fruit of the tree was good for food and pleasing to the eye, and also desirable for gaining wisdom, she took some and ate it. She also gave some to her husband, who was with her, and he ate it.”

You know they say the apple doesn’t fall far from the tree.

He wants you to be free.

“So the Lord God said to the serpent, “Because you have done this, “Cursed are you above all livestock and all wild animals! You will crawl on your belly and you will eat dust all the days of your life. And I will put enmity between you and the woman, and between your offspring and hers; he will crush your head, and you will strike his heel.””

We can’t help it.

But God knew that.

And He made a way out.

Jesus volunteered before the world began

He volunteered before you were born

To bruise the head of the devil.

He died for your sins.

The devil thought he had the upper hand.

But it was all part of God’s plan to bring you home in your heart.

He wants you to choose Him.

And you can do it right now by putting your faith in Jesus.

The Bible says he was bruised for your sins.

That he was wounded for your mistakes.

And by those wounds he heals you.

Shout out to all the Rockingham County natives!

Rockingham is a name used for several things.

Rockingham Avenue is the street where OJ Simpson lived before the new owner tore it down.

We're all familiar with "The Rock" the speedway in Richmond that's now defunct.

There's also a former race track in New Hampshire. It's now a horsetrack.

If that's you, keep listening.

There's also the man Rockingham County is named after.

A man who was known in the 1700s as Lord Rockingham.

This man was a Brit.

In fact, he served as Prime Minister - TWICE.

And he was one of the first to tell Britain to give up the fight to keep the United States as a colony.

He said, it's a losing battle.

Trying to hold on and control this country was futile.

He wasn't popular and didn't stay in office longer than a year and a half.

His first term ended because there was division in his party. They couldn't hold it together.

But he kept fighting for the right for America to have its own constitution.

He had faith in America.

His second time in office he was there only a few months.

But he pressed onward aggressively arguing for America to be independent.

This guy also looked out for the poor.

He helped establish housing for the unemployed and impoverished.

He died fourteen weeks after he took office that second time from the flu.

He died before he saw his dream for America.

The Lord wants different for you.

He wants you to realize His promises in your life.

Before this parable the Lord talked about people who look good on the outside, but they don’t have Jesus in the inside.

Thus, by their fruit you will recognize them. “Not everyone who says to me, ‘Lord, Lord,’ will enter the kingdom of heaven, but only the one who does the will of my Father who is in heaven. Many will say to me on that day, ‘Lord, Lord, did we not prophesy in your name and in your name drive out demons and in your name perform many miracles?’ Then I will tell them plainly, ‘I never knew you. Away from me, you evildoers!’”

He wants you to have The real thing.

He showed us the Father.

He showed us what it looked like to build a life on God.

And he called us.

He wants you to live a fruitful life.

And he made it real simple:

You don't have to fight a losing battle anymore.

Come to Jesus as your Lord.

It’s made of dirt.

And it’s highly valuable because of what it cost and what it contains.

Jesus does not just to save you, but to give you His Spirit.

He wants you to have power.

His death for you proves your value.

It he wants you to be an earthly house for the Holy Spirit.

“While Peter was still speaking these words, the Holy Spirit came on all who heard the message.

For they heard them speaking in tongues and praising God. Then Peter said, “Surely no one can stand in the way of their being baptized with water. They have received the Holy Spirit just as we have.””

“When the apostles in Jerusalem heard that Samaria had accepted the word of God, they sent Peter and John to Samaria. When they arrived, they prayed for the new believers there that they might receive the Holy Spirit, because the Holy Spirit had not yet come on any of them; they had simply been baptized in the name of the Lord Jesus. Then Peter and John placed their hands on them, and they received the Holy Spirit.”

Do you want to be closer to the Holy Spirit?

Do you receive this promise of His Spirit moving in your life?

All you need to do is receive it.

Ask the Lord for all He died for you to have to live an abundant life.

He died for you to live NOW.

Jesus died to send His Spirit with power in your life.

Power of the enemy of your soul.

Will you receive the infilling of His Spirit tonight.

He's willing to come, if you just invite Him in.

And we'll wait for Him.

Prophetic Word: God Is Looking For A Desperate Church